Film News & A-list innovations at the top of the game. 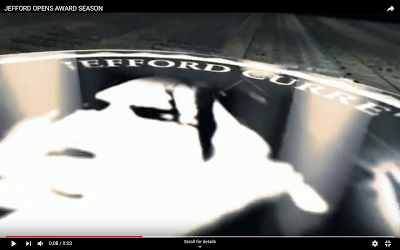 INTERNATIONALLY ACCLAIMED - "JEFFORD CURRE' DISTINGUISHED MEDAL OF HONOR" is  the most influential award brand for box-office entrepreneurs.  It pivots on the cutting edge of a new world of box-office excitement.  Focused on the bigger picture, ''HONOR''  it continues to empower a global tribe, holding their own against incredible odds. "JEFFORD CURRE' DISTINGUISHED MEDAL OF HONOR" recognizes 21st. century geniuses.   It spotlights the diligence of those who have identified the area of their talent and it salutes  the  vision of todays master artist. It cultivates the highest level of respect for those who have found the courage and organizational ability to make it a lifestyle of full-time commitment. As a result, they have succeeded at the top of their game in service to their community, as they inspire the world.

SEE THE VIDEO AT jeffordcurre.com

This award season, fans will have a first look at some of the more spectacular films driving the bold and exciting new era in film entertainment at jeffordcurre.com.

Email ThisBlogThis!Share to TwitterShare to FacebookShare to Pinterest
Posted by Stars In Paradise at 8:05 AM No comments:

''JEFFORD CURRE' PARADISE INTRIGUE'' is a fictional thriller that has a documentary level of realness but try to remember it's only a movie. The story transitions through time periods, as it follows a top secret government agent who finds himself at the center of a global crisis. He's a high target for underground recruitment. False accusations, driven by fake news media tied to evil agendas has made the character of this time ticking blockbuster a top priority of an international manhunt. The big question remains, does the truth alone have what it takes to set him free against the dark diabolical plots of real and present evil. It's a race against time and against all odds, as he battles to save a peaceful playground from total destruction.

jeffordcurre.com
Posted by Stars In Paradise at 11:15 PM No comments: